The Valley of the Sun has a new trailhead just in time to enjoy with the arrival of autumn weather.  If you like to hike, bike or horseback ride, check out Brown's Ranch Trailhead in north Scottsdale.

The cool mornings of October are a great time to get out and discover the newest trailhead of Scottsdale’s McDowell Sonoran Preserve when the Brown’s Ranch Trailhead is officially dedicated at 9 am on October 19.
The McDowell Sonoran Preserve is proclaimed to be “like no other place in the Valley!”  Such a proclamation is due to the preserve’s unique geology, lush forests of cacti, phenomenal geography and a wide diversity of wildlife.
With a plan first put into action in 1991, the preserve has grown to over 27,800 scenic Sonoran Desert acres on the far northeast edge of Scottsdale and has already received numerous awards for the design of its many trails and facilities.
The Brown’s Ranch Trailhead is the fifth trailhead dedicated in the preserve which now features over 100 miles of hiking/biking/horseback riding shared-use trails.  Other trailheads already open and just waiting to be explored include the Gateway Trailhead, the Lost Dog Wash Trailhead, the Sunrise Trailhead and the Tom’s Thumb Trailhead.
For those who love to rock climb, the preserve has over 200 named climbs among the rock splendor of the McDowell Mountains.  Difficulty of the many climbs range from easy to difficult with a few local favorites being Granite Ballroom, Sven Slab and Tom’s Thumb itself.
Early morning bird watching is a common activity for visitors to the McDowell Sonoran Preserve.  Over 100 species of birds have already been documented within the preserve.  And since many American songbirds from the northern regions overwinter in the Sonoran Desert, October thru February are prime months for bird watching enthusists.
Docent led hikes, including holiday hikes, are also available on all five trails of the preserve. There are inclusive hikes for most all interests and hiking abilities.  Discovery hikes are designed especially for children and Wellness hikes are offered for anyone who needs to get up and get moving.  For more information about guided hiking within the preserve call 480-947-8814.
The new Brown’s Ranch Trailhead features a series of interpretive exhibits about the human history and use of the preserve.  It now also becomes the gateway to such unique mountaintop destinations as Cathedral Rock, Balanced Rock and Granite Mountain.  The Brown’s Ranch trail also makes the long awaited connection between the McDowell Sonoran Preserve and the Tonto National Forest.
Parking for over 200 passenger vehicles, shade ramadas, fresh drinking water and restrooms are all found at the trailhead’s interpretive center.  In addition, twenty-four horse trailer parking spaces, hitching rails and water troughs make this an ideal equestrian staging area.
The City of Scottsdale has designated October to be the official McDowell Sonoran Preserve Month with October 19 being a special day for the Brown’s Ranch Trailhead.  So why not get out and discover for yourself this natural, wilderness treasure just 24 miles from Anthem?  The cost to discover this beautiful desert land is always free; only costing your time and a desire to explore the beauty of the undisturbed Sonoran Desert. 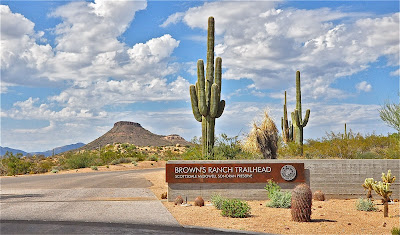 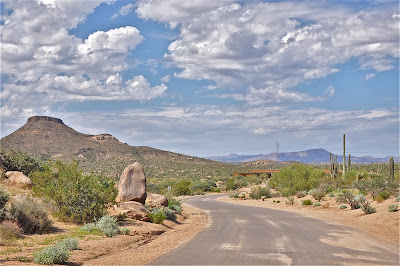 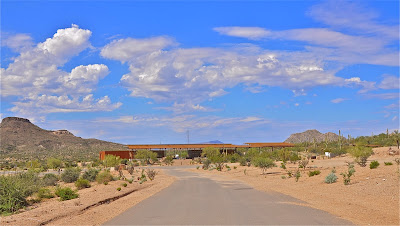 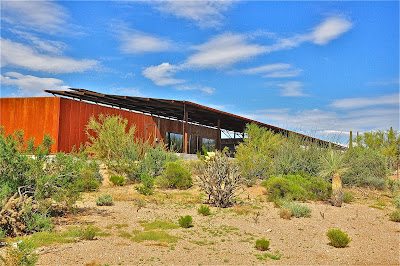 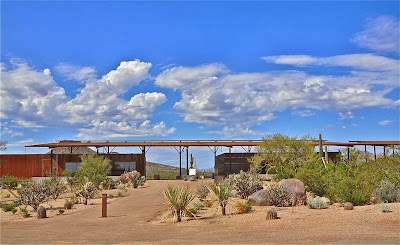 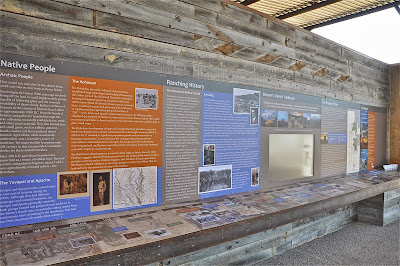 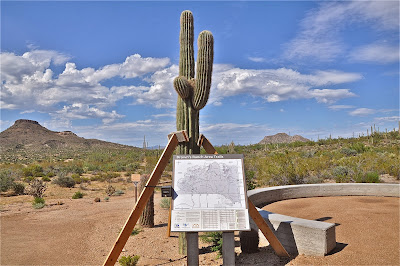 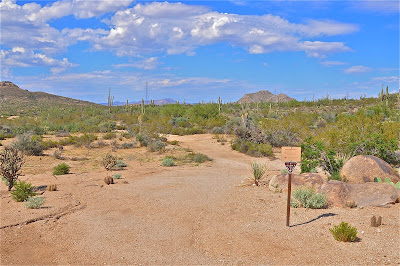 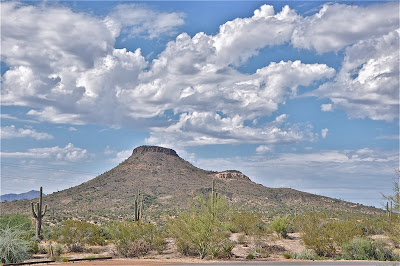 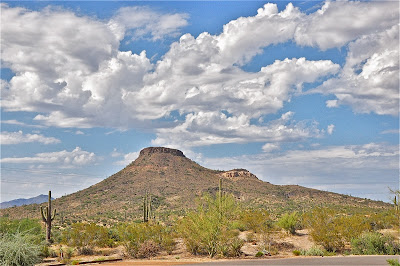 Posted by Linda/Dr. Dick Buscher at 5:59 PM No comments:

A Few More Scary Places to Stay Around Arizona


Some more spooky hotels around Arizona to enjoy during the Halloween season or really, any time of the year.  Photos 6, 7 & 8 belong to the good folks at the Noftsger Hill Inn in Globe.

Friendly ghosts are as much a part of the story of Arizona as cowboys, cacti and spectacular sunsets.  The historic hotels scattered throughout Arizona are full of men, women, children and pets that once checked in for a night’s stay but never checked out.  Now these old establishments and their Arizona towns are worth a visit any time of year but the Halloween season is hauntingly perfect!
Our search for Arizona spirits begins in the old copper town of Bisbee.  Such places as the Bisbee Inn, The Inn at Castle Rock and the Copper Queen all have their special out-of-this-world guests.
The Bisbee Inn seems to be an inn full of these never-leaving folks.  Rooms 12, 14, 15, 16, 17 and 23 all have ghost reports filed with the inn’s management.  Room 23’s ghost is said to be that of a mischievous cat who welcomes guests in a “purrfect” way.
The Copper Queen Hotel is Bisbee’s grandest and most famous place to spend a night or two.  Built in 1902, this grand lady was the center of commerce and society when copper was king in Arizona.   Three ghostly folks still make the Queen their home and often spend time entertaining or scaring today’s hotel guests.
Room 315 of the Copper Queen is home to the spirit of Miss Julia Lowell, a lady of the night who once plied her trade here.  Many a male guest has reported a nighttime visit from the spirit of this shady-lady who took her own life after losing the man of her dreams.
The Copper Queen is also home to the spirit of an elderly gentleman fashionably dressed including a black cape and top hat.   The third spirit resident is that of an eight-year old boy who drowned in the nearby San Pedro River but found his way back to the Copper Queen to where his mother worked.  He seems often found in the dining room interacting with the children of modern hotel guests.
Prescott’s old hotels are well known for their permanent spirit guests too.   Since 1921 Room 16 of the Hotel Vendome has been the home of Miss Abby Byr and Noble, her faithful cat.  Abandoned by the love of her life, Abby and her cat starved to death in this room while waiting for his return.  Modern guests report visions of a beautiful young lady and her cat still making the best of their time in Room 16!
Just a few blocks up the road at the Hassayampa Inn in Room 426 still waits a young women known only as Faith whose husband left her, never to return, on their honeymoon night in 1927.  Three days later, a heartbroken Faith took her own life while still checked-in to Room 426.  It is said that Faith has never left that room and the lilac scent that still occurs only in Room 426 is evidence of her spiritual presence.
The stories of friendly spirits found in the hotels of Arizona go on and on.  There is the bank robber of the Hotel Monte Vista in Flagstaff.  George Buford hasn’t yet left the home he built in Tombstone in 1880. Lady guests of today’s Buford House Bed & Breakfast report something tickling their feet in the middle of the night and house dogs and cats seem to playfully watch this friendly phantom moving about the house and grounds.
The Gadsden Hotel in Douglas is a ghost hunter’s paradise because of all the spirits who still call this 1907 hotel home.  Room 333 still has the rocking chair that just won’t stop rocking and you don’t even want to ask about the phantom cowboy that still rides through these hallways.
The San Carlos Hotel in downtown Phoenix and the Congress Hotel in downtown Tucson both have their haunting stories.  The Grand Hotel in Jerome is so active with spirits that it offers today’s hotel guests “ghost-busting” tours.  The old North Globe Schoolhouse in Globe, known today as the Noftsger Hill Inn, is full of young lads who have stayed long after school is out to do more than just clean the blackboards and erasers.
So this fall, why not get out and discover Arizona’s historic and haunted hotels?  You’ll find yourself either being entertained or being chilled by one of our state’s friendly apparitions.

Posted by Linda/Dr. Dick Buscher at 8:12 PM No comments:

There is no place to spend Halloween like the Grand Hotel in Jerome.  But, be warned…!

Ghost stories and ghost towns have always been a part of the legend and lore of Arizona.  As Halloween once again approaches, no Arizona haunt could be more “unique” and ghostly than the Asylum Restaurant located in the Jerome Grand Hotel.
To celebrate this hallowed evening at the Asylum Restaurant will be a night to remember. The fun begins again at 9:00 p.m. and it is guaranteed to be a celebration you won’t soon forget.  This yearly gathering at the Jerome Grand Hotel is a huge social event in the Verde Valley, so be sure to call the Asylum Restaurant for the ghostly details!
Jerome, Arizona was one of the many boom-mining towns of Arizona.  Built on the slopes of Cleopatra Hill, the first miners’ tents began to appear in 1876. When the United Verde Copper Mine began operations in 1883, Jerome’s population exploded to over 15,000 Wild West characters.
Americans, Irish, Mexican, Croatian, Spanish, Chinese and Italian miners all soon made up this special population so common in Arizona’s mining camps.  As the vein of copper ore ran deeper and deeper into the earth, the town and its people prospered.
By the late 1920s a hospital was needed to serve this mining town and all the Verde Valley.  A Spanish-mission style building was designed and soon a five-story, 30,000 square foot, poured, reinforced concrete building was constructed on a 50-degree slope of Cleopatra Hill.  The building was designed to withstand dynamite blasts of 260,000 pounds that on occasions were set off by the copper mines.
The United Verde Hospital is the highest building ever built in the Verde Valley, at an elevation of 5240 feet. It served the medical needs of all the Verde Valley until 1950 when it closed as mining operations ceased.
With the closing of the mines, Jerome, an Arizona boomtown of over 15,000 citizens from every corner of the world, became home to only 50 hardy souls. When the copper ore ran out, the classic Western Ghost Town was born.
The United Verde Hospital building would now sit idle and empty for the next 44 years.  Finally, in 1994 the Altherr Family bought the building from the Phelps Dodge Corporation with the intent to renovate it and to convert it into a unique Arizona hotel.
In 1996 the Jerome Grand Hotel opened for business.   Being an old hospital it had a history of many unusual medical happenings and surely was the site for both many beginnings and endings of life.  The ol’ building is said to be haunted and weekly Ghost Tours are a part of the hotel’s unique offerings.
For hotel guest only, each Tuesday night is Ghost Tour nights.  For a tour-fee of $20.00/person, modern day Ghost-Busters are provided emf meters, infra-red thermometers, and digital cameras to search for any out-of-this-world guests who might be hanging out in the old hospital now hotel building.  This tour may not be for the faint of heart, so be pre-warned. The Tuesday night, 2-hour tour ends in the town’s old silent movie theatre that is now part of a historic museum.
If you can’t make it to this year’s Halloween party at the Asylum Restaurant, just know that the Jerome Grand Hotel is still a great place to experience a night in the Verde Valley.  The views of the Verde Valley from the hotel windows are truly spectacular.
So next time you’re looking to Get Out, think about spending a night at the Jerome Grand Hotel in one of the most famous Ghost Towns of Arizona.  If that night just happens to be on a Tuesday evening, prepare for a fun-filled ghost-busting adventure.  If it happens to be on the night of All Hallows’ Eve, remember, you were warned - Boo! 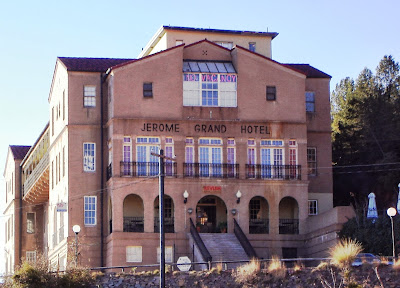 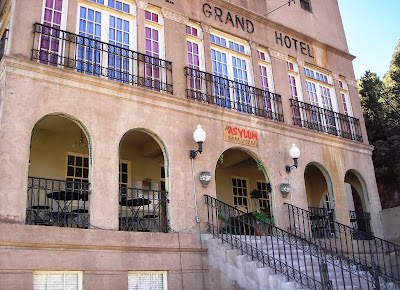 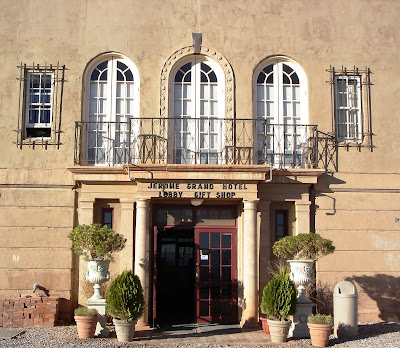 Posted by Linda/Dr. Dick Buscher at 7:24 PM No comments: 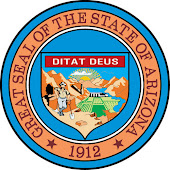